I offer HIPPA compliant Video Sessions for simple and secure session for for all new and returning clients. No download required. Please contact me for more information or if you would like to schedule an appointment or consultation. Thanks you!

U Can't Touch This! 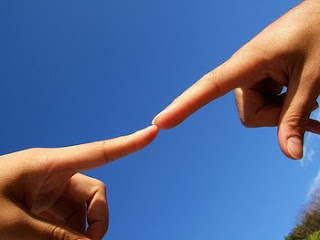 MC Hammer's song "U Can't Touch This" isn't about body memory or sensitivity. But the title catches the experiences of many. Several clients have talked about having locations on their bodies that were off limits or extremely sensitive to touch. "The body holds the wisdom" reminds us that touch sensitivities are pointing toward the need for healing. I have found that EFT is a power therapy technique that provides a road map to relief.

When a husband read some of is wife's erotic email to her lover, he developed a touch sensitivity trigger by a specific visual image. After the hard work of repairing the relationship had been accomplished, his touch sensitivity still remained. An affectionate touch on his neck would send bolts of anger and charge through his spine. Even though he had chosen to forgive his wife, his body seemed to be sending a different message. It was still reacting with the same intensity of his first shocking discovery. Utilizing a "Tell The Story" Technique from EFT enabled this client to completely clear out his touch sensitivity. Both partners were grateful. The involuntary nature of his touch issue was painful reminder of the infidelity.

Another person had been living with a touch sensitivity most of her life. Just thinking about someone bumping into this sensitive spot on the middle of her back or being in a crowded commuter car was enough to trigger a SUD's of ten. Just thinking about focusing her mind on someone touching her mid back was enough to trigger a strong stress response (strained voice, facial tension and exasperation).

The Tearless Trauma Technique starts with this least disturbance and moves through to focusing directly on the worst aspect. We don't move to the next scene until each one is collapsed to a level of zero. In this manner, by the time we actually get to her focusing on someone or thing touching her back, her distress response is muted. After 60 minutes of clearing out each aspect that created a "ping," this person was able to completely eliminate her touch sensitivity. Several attempts to provoke hidden aspects fail to produce any touch sensitivities. All this client could say at the end of the session was "Wow!"

Four weeks later she reported that the problem was "gone!" She said, "....it is no longer a issue."

This client had told me that she had done extensive work through traditional talk therapy for her childhood abuse and trauma. Yet, it seemed her back was still clinging to old sensations. Tapping while holding in focus the shifting distress resulted in the removal of her touch sensitivity.

Touch Sensitivities often have "feeder roots" that help to form symptoms. This is why EFT is so effective and rapid with children. They haven't accumulated the intertwined roots of toxic experience and negative beliefs that many adults possess. Some folk have reported being able to clear these symptoms on their own through tapping. Yet, most have found it more effective to have a trained EFT Practitioner lead them through the process. Solid skills, psychological knowledge of trauma work and good intuition can help to get at core aspects that create touch sensitivities and provide lasting relief.
Posted by Greg Carpenter at 8:04 PM No comments: